A sign is pictured outside the Bank of Canada building in Ottawa, Ontario, Canada, May 23, 2017. REUTERS/Chris Wattie/File Photo

BENGALURU, July 9 (Reuters) – The Bank of Canada will taper its asset purchases again at its July 14 meeting, encouraged by robust growth prospects, according to a Reuters poll of economists who also said a spread of new COVID-19 variants was the top economic risk this year.

After recording its steepest annual decline last year since quarterly data was first noted in 1961, Canada’s export-driven economy was forecast to grow 6.2% on average in 2021, the July 5-8 poll of 32 economists showed, marking the fastest annual expansion since 2007.

The BoC’s latest Business Outlook Survey indicator rose to a record high on a rapid vaccination drive and the lifting of some measures, pointing to a broadening economic recovery.

“Canada got some good economic news to kick off the summer. The economy was not as hard hit from the third wave…as previously feared,” said Sri Thanabalasingam, senior economist at TD Economics.

“The speed of the vaccine rollout has been impressive and could lessen the downside risks posed by the Delta variant of the virus.”

Among the Group of Seven central banks, the BoC was the first to tighten policy when it reduced its weekly asset purchases programme in April.

Based on a rapidly-brightening outlook, it was expected to taper those purchases again at its July 14 meeting, by C$1 billion to C$2 billion per week, according to all 21 economists who responded to an additional question.

“With the economy doing a bit better than the Bank expected and inflation far above target, the Bank is set to taper its asset purchases again,” noted Stephen Brown, senior Canada economist at Capital Economics. 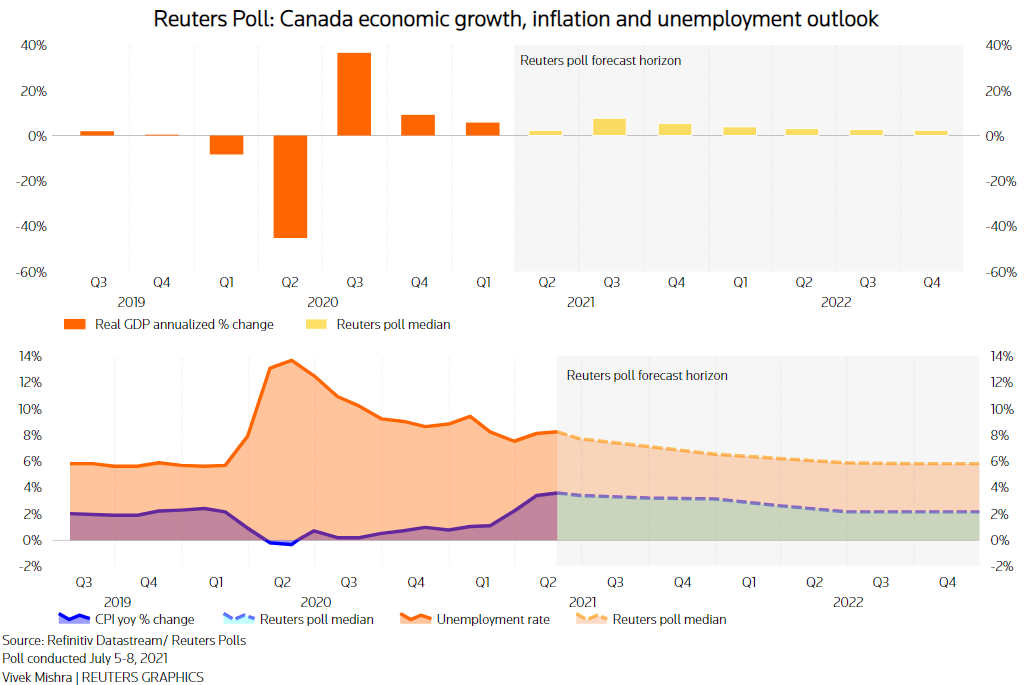 Canadian inflation was expected to remain above the mid-point of the central bank’s target of 1%-3% in each quarter of 2021, averaging 2.7% this year and 2.2% next, up from 2.0% predicted for each of the years in an April poll.

Nearly 80% of economists, or 15 of 19, responding to a separate question said the BoC would raise rates before the U.S. Federal Reserve, which is set to taper its asset purchases as soon as this year, according to the minutes of its June policy meeting.

The latest Reuters consensus showed the BoC would raise its key interest rate by 25 basis points to 0.50% in the final quarter of next year.

A slightly higher number of economists are now predicting that hike to come as early as Q3 compared with a June poll.

Canada initially wrestled with a slower rollout of vaccines than other countries due to a lack of domestic production.

The latest positive outlook was driven by a ramp up in the inoculation drive in recent months – with about 70% of Canadians having received at least one dose, according to Reuters’ COVID-19 vaccine tracker.

But the spread of new variants of the coronavirus still poses the biggest risk to the Canadian economy this year, according to a majority of economists in response to another question.

“A resurgence of the virus could result in a renewal of restrictions that would send the economic recovery into reverse,” said TD Economics’ Thanabalasingam.