Through a combination of amazing regional support and love for the sport of baseball, the local business, government and baseball community all rallied behind Dos Pueblos Little League this week in response to the fire that destroyed the DPLL shed and the equipment it housed at Girsh Park in Goleta.

American Riviera Bank launched a donation matching campaign on Friday, August 20. Thanks to an overwhelming response from residents, local businesses and community leaders, the DPLL announced that, by Monday evening, it had met its fundraising goal and will be able to cover the entire expected cost of lost structure and equipment because of donations and pledges received.

“This is the Central Coast community at its finest,” said Jeff DeVine, President and Chief Executive Officer at American Riviera Bank. “We couldn’t be prouder of what we were able to accomplish in such a short time. DPLL has been serving our community for almost 50 years – our community showed up to express their appreciation this week.”

In addition to the $7,500 in matching funds American Riviera Bank pledged to the local nonprofit, the City of Goleta, Mark Linehan of Camino Real Marketplace, Daniel and Mandy Hochman, and Joan Hartman, Supervisor Greg Hart and James Kyriaco made donations totaling $14,000 to bring the campaign over the finish line.

“Our children and youth deserve every opportunity to recreate safely, enjoy sports and create lasting memories. Participation in the Dos Pueblos Little League helps our youth build not only athletic ability but also socialization and relational skills that will last for a lifetime,” said James Kyriaco, Mayor Pro Tempore City of Goleta. “I am so pleased that the City of Goleta was able to partner with Mark Linehan, Daniel & Mandy Hochman, and the offices of County Supervisors Joan Hartmann & Gregg Hart to join the efforts of American Riviera Bank and other community members to help put the fundraising effort over the top”.

Dos Pueblos Little League is actively planning and purchasing all items lost in the fire and will be up and running by start of the Spring Season in early March 2022.  Full season plans, exciting new league offerings, and other aspects of DPLL to kick- off the early registration process will be released in October announcement by DPLL.

American Riviera Bank announced Friday that it has partnered with Dos Pueblos Little League (DPLL) in an effort to raise funds to replace the shed containing the nonprofit’s pitching machines, field equipment, and other supplies which was destroyed Wednesday in a suspected arson fire at Girsh Park in Goleta.

The Central Coast community bank has pledged to match all donations to Dos Pueblos Little League up to $7,500 in an effort to jumpstart their fundraising efforts and to raise at least half of the estimated $30,000 it will take to replace the structure and equipment.

“As soon as we heard about the loss of the DPLL shed, we knew we had to do something.  American Riviera Bank has been a staple in the Goleta community for years, and many of our employees grew up playing ball at our beloved Girsh Park,” said Joanne Funari, Executive Vice President and Chief Operating Officer at American Riviera Bank.  “They used that very shed to store their equipment.  My son played ball there and my husband coached the little league teams there.  We love this community and we are honored to help.”

Dos Pueblos Little League has been in operation since 1974. The organization originally played where Camino Real Shopping Center is now located, but moved in 1997 to Girsh Park when the center was built. They have played there ever since and have stored their equipment in a shed in the park.

“While this appears to be a random act of vandalism, DPLL is significantly impacted by the loss of structure and equipment.  Fall baseball practices and tournaments held at Girsh are also affected by this fire, but we are going to do our best to replace equipment as soon as possible,” said Jeff Palmer, president of the Dos Pueblos Little League. “We can’t thank American Riviera Bank enough for the long standing relationship and support of our program, and the generous offer to match donations.”

A fund raising account has been created for Dos Pueblos Little League at American Riviera Bank’s Goleta branch at 5880 Calle Real, but donations may also be made online or at any of the Bank’s other locations. 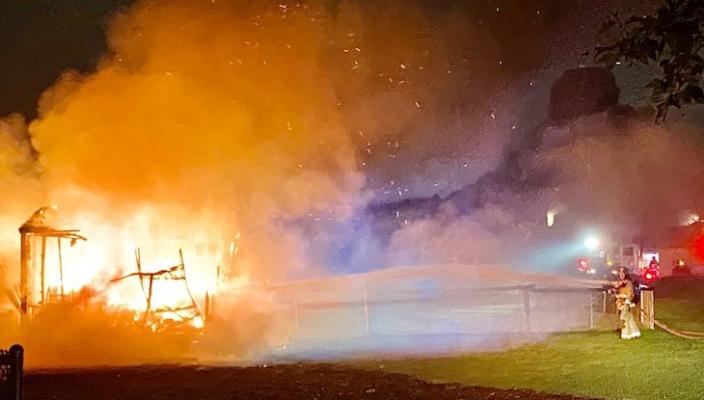