Many managers are susceptible to the famous sunk cost effect, whereby they persist investing in a money-losing project even when it makes sense to invest the new money in alternative new projects. The research-based tool presented in this article enables managers to measure that susceptibility.

Have you continued with a project long after you should have abandoned it? Persevered with a relationship even after the point of no return? Dragged yourself to an event in miserable weather just because you already bought the ticket with your hard-earned cash? These are all examples of the “sunk cost effect,” which occurs when someone chooses to do or continue something just because they have invested (unrecoverable) resources in it in the past.

The effect is often attributed to well-known high-stakes decisions across various contexts. For example, the management at General Motors’ reluctance to move away from once-winning strategies is said to have contributed to the firm’s decline late in the last century. In aviation, throwing good money after bad is generally considered to have led to the massive investment by the British and French governments in the Concorde project (indeed, the sunk cost effect is still sometimes referred to as the Concorde Fallacy). And in the political sphere, examples such as the prolonged U.S. military campaigns in Vietnam and Iraq suggest that the effect can lead not only to financial ruin, but also to the loss of tens of thousands of lives.

It is a core lesson in many business economics or decision-making classes that any unrecoverable costs sunk in the past are irrelevant when deciding what to do next. Decision-makers need to remember: when sunk costs affect strategic decisions, there can be real and dire consequences.

Measuring your team’s susceptibility to the sunk cost effect

Researchers address the challenge of measuring the effect by presenting people with questions about what they would do in various hypothetical scenarios. However, the scenarios do not typically cover the wide range of costs that can be sunk (e.g., money, time, effort, emotion). And we really have had no idea whether the answers to those hypothetical scenarios actually predict whether people succumb to the effect in a situation with real consequences on the table.

My recent work with Daniel Sgroi and Anthony Tuckwell, “Evaluating the Sunk Cost Effect,” bridges those gaps and provides a new scale of eight questions to measure susceptibility to the effect. Each scenario provides a realistic everyday situation that anyone should be able to easily imagine themselves in. Collectively, the scenarios cover a range of costs that can be sunk. In most instances a variety of costs are sunk because our resources tend to be highly interconnected. For example, many important decisions require not only more salient and measurable costs such as time and money, but also those which we feel more personally such as effort and emotion, and each of us may feel the weight of those costs differently. For these reasons it seems undesirable and futile to try to always refer to only one type of resource per scenario or to only offer scenarios that feature one resource. Rather, it is important to include scenarios that emphasize different mixes of resources.

How did we do it?

We put an initial set of 18 scenario-based questions to respondents that collectively covered five different resources that people spend (effort, time, money, emotion, and belief), drawn from a variety of sources. As an example, here is one of the scenarios, which emphasizes effort but also time (the relevant text is underlined here for illustrative purposes):

You have been looking forward to this year’s Halloween party. You have the right cape, the right wig, and the right hat. All week, you have been trying to perfect the outfit by cutting out a large number of tiny stars to glue to the cape and the hat, and you still need to glue them on. On the day of Halloween, you decide that the outfit looks better without all these stars you have worked so hard on.

Which point on the scale below best describes what you would do?

Statistical analysis of the response data suggested we select eight of these 18, leaving us with our scale, the “SCE-8”. The resources each of those scenarios focuses on is shown in the exhibit Testing Sunk Costs. Our analysis identified which scenarios gave responses that best described the most variation in the data. Remarkably, the eight scenarios we are left with cover the full range of resources we considered, supporting the idea that one should consider many resources when looking for a measure of susceptibility to the sunk cost effect. 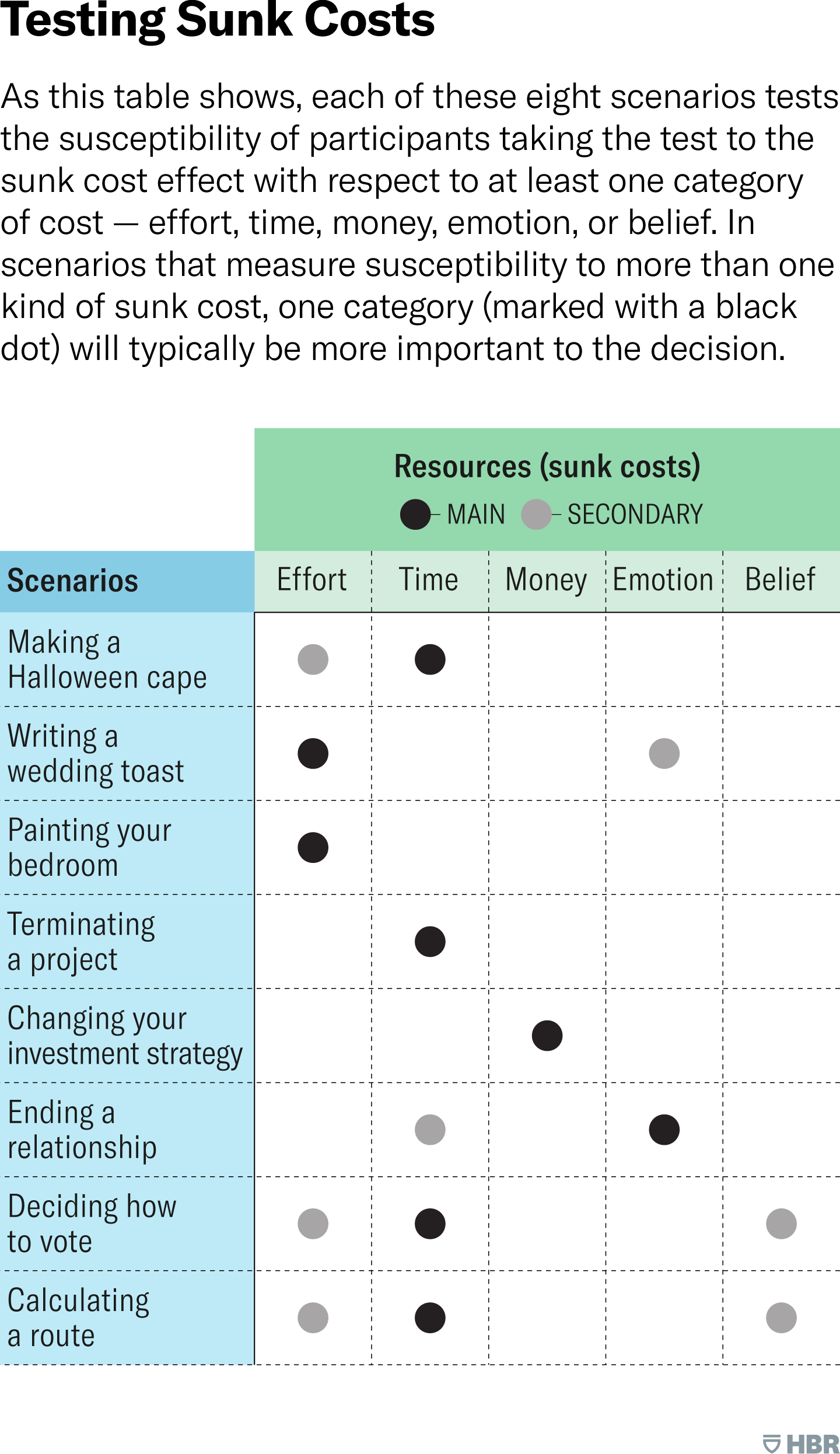 To test how predictive the score is in an environment with real consequences, we required the same respondents to complete an experiment in which they could win money. Respondents in one group earned an “asset” (a lottery ticket that paid $10 with a 10% chance) by performing well on a laborious task (thus requiring them to sink costs such as time and effort). Respondents in a second group were not required to complete any task but were simply asked to choose between the two assets.

We gave those in the first group the choice of sticking with the asset they had earned or exchanging it for a better asset (that paid $10 with a 20% chance). Twenty-three percent elected to stick with their original (inferior) asset. By contrast, respondents in the second group all chose the better asset. In other words, a substantial number of people in the first group stuck with a worse asset because they had sunk their time and energy to earn it, demonstrating their susceptibility to the effect. In addition to providing a susceptibility scale, we are also the first to show strong evidence of the sunk cost effect in an experimental setting with real incentives.

Our work also sheds light on the drivers of susceptibility to the sunk cost effect. Our respondents completed psychological tests providing various measures of cognitive ability. We found that experience or stocks of knowledge (so called “crystallized intelligence”), rather than raw computational power (“fluid intelligence”), enable one to avoid falling prey to the effect: in other words, being wise may count more than being smart.

This is consistent with the general theory that to avoid decision-making biases, you need the ability to recognize the fact that you’re facing a situation in which you should override your instincts or heuristics. In contrast, the brute force brainpower needed to avoid the sunk cost effect once you realize you face it, is relatively slight.

However, if seasoned decision-makers at the top of large firms and governments succumb to the effect it shows that although experience may help, it is not sufficient to override important biases such as the sunk cost effect. Your own experience may have made you wise to some traps, but regardless of your seniority, by choosing what you would do in the scenarios of the SCE-8 you will get a sense of how susceptible you are, and with that in mind, empower yourself to make better decisions in the future.