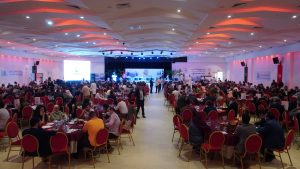 Several agreements between Libya and Tunisia were signed at the Djerba International Business Forum (Photo: DIBF).

Numerous outcomes of the Djerba International Business Forum (DIBF) held between 28-29 May in Djerba have come to light.

These include the signing of a set of agreements in various fields to overcome all obstacles facing Libyan and Tunisian investors, especially in the field of money transfer and ownership.

The Council is to work on networking Tunisian-Libyan economic relations and increasing their support. It is to follow up on the agreements concluded at the forum and to resolve all the problems that may be encountered by investors from both sides.

A partnership agreement that included:

Libya’s Zawia Chamber of Industry, Commerce and Agriculture with:

– And a partnership agreement between the South Development Bureau and the Association for Development, Investment and International Cooperation in the field of accompanying Libyan investors to promote private investment within its areas.

Several agreements were also signed between businesses from the two countries, including:

Finally, the DIBF’s organizing bodies and the Libyan institutions agreed to turn this international forum into a regular, annual event. Both sides also agreed to hold a second forum before the end of this year in Libya.

Participants expressed their desire to restore the pattern economic relations between Tunisia and Libya to a better level than it was before 2011, by restoring the pattern of commercial exchanges and investments and developing them by liberalizing the movement of individuals, goods and capital by all possible means and facilities possible administratively, financially and logistically.

This includes the decision to adopt a unified inspection window at the land border crossing between the two countries.