Sometimes a sweet tooth can be inspirational 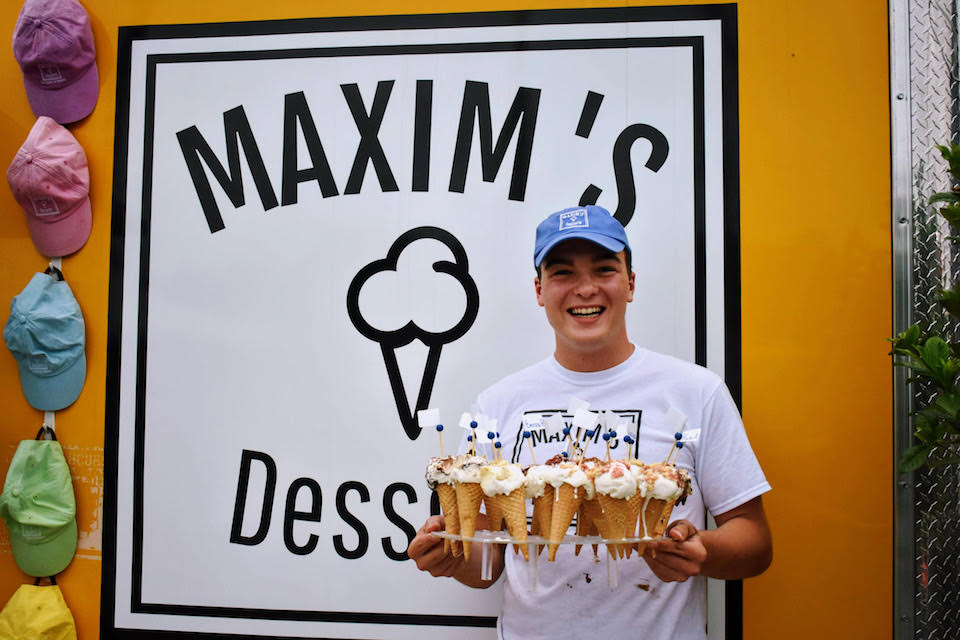 Max LeBlanc holds a tray of “pie cones” next to Maxim’s Desserts.

In high school, Max LeBlanc ’22 worked afternoons in an ice cream shop in Kennebunk, Maine, his hometown. One day during a break, he wandered over to a nearby bakery known for their pies.

After a few bites of blueberry pie, LeBlanc had an epiphany: “‘OK, I can do something cool with this,'” he told himself.

What followed was the “pie cone,” a dessert that combines ice cream and pie as a handheld, to-go treat. It consists of a waffle cone with crushed pie filling stuffed with local ice cream and a little more pie from Valley View Orchard Pies sprinkled on top.

LeBlanc started making the concoction for family and friends, and its sweet reputation grew. He eventually turned the concept into a business. He split the cost of a food trailer with his parents his senior year of high school, and Maxim’s Desserts was born. A Kennebunk restaurant allowed him to host Maxim’s in its parking lot.

When he came to Brandeis, he considered the business a fun summer project, but didn’t see it fitting into his future — LeBlanc initially intended to pursue a pre-med track. But after taking some introductory business courses and spending another summer running Maxim’s, he decided to become a business major.

He’s since found a passion for marketing while taking courses with Brandeis International Business School professor Grace Zimmerman, and meeting with executives from companies like Estée Lauder, Shark-Ninja, and Plant City. While at Brandeis, LeBlanc also expanded Maxim’s, hiring 6 or 7 part-time workers per summer. People slowly began to seek out the dessert truck, reaching over 10,000 sales in a summer.

“It’s been a cool experience to see and to measure my personal growth alongside both my college experience and the growth of my business,” he said.

For the past three summers, Maxim’s Desserts could be found in Kennebunk. This year the business had to find a new home because the host restaurant was undergoing construction. Unable to get the permits he needed to operate on Kennebunk streets, LeBlanc turned his gaze further north.

In August LeBlanc started hauling Maxim’s to Portland, Maine to set up shop.

“It’s a new adventure for me and I’m really excited to see how it goes,” he said.

As for the future, LeBlanc isn’t quite sure what it holds — maybe he’ll turn Maxim’s into a franchise, or perhaps he’ll pursue a career in fashion. No matter what path he chooses, LeBlanc says running his own business, combined with his Brandeis experiences have given him the confidence to succeed.

“To be treated in ways that you didn’t think you deserved before, or just having experiences that I never imagined I could have, really built up my confidence to think that I can do something big,” he said.