In his new book, Three Days at Camp David, Jeffrey E. Garten tells the behind-the-scenes story of what former U.S. Treasury Secretary (and Secretary of State) George Shultz once called “the biggest step in economic policy since the end of World War II.” On the weekend of Aug. 13-15, 1971, President Richard Nixon and his top policymakers decided to halt the conversion of other nations’ dollar reserves into gold—the mainstay of the postwar financial system—so as to relieve the United States from its costly role as the main driver of global economic growth. 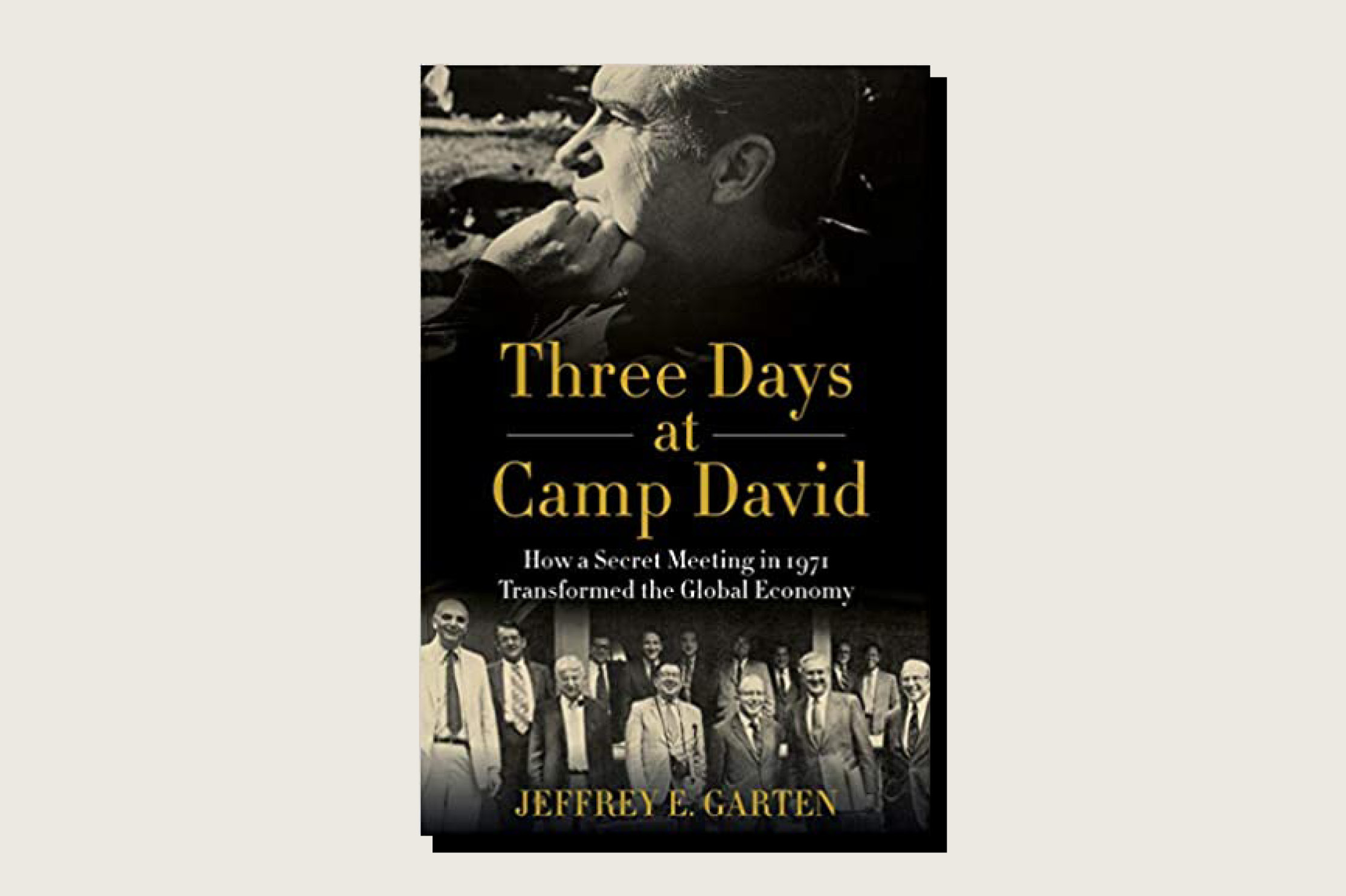 “The days in which America shepherded Western Europe’s and Japan’s recovery, the era in which it had opened its markets to imports without receiving reciprocal treatment, the years in which it funded a disproportionate amount of the common military defense … all that was going to change,” Garten writes. The United States would henceforth seek to solve its own problems while continuing to lead and support the international system.

In an interview, Garten, a former undersecretary of commerce under President Bill Clinton and dean emeritus of the Yale School of Management, compares that “inflection point” 50 years ago to what President Joe Biden faces today as he seeks to address America’s internal challenges in the face of rising economic instability abroad. This interview has been edited for length and clarity.

Foreign Policy: What are the parallels you see between that decision on Aug. 15, 1971, and today?

Jeffrey E. Garten: Then, as now, the United States was asking itself the most basic questions about its place in the world. Prominent politicians and ordinary citizens alike were convincing themselves that America gave much more than it received from the burdens of its leadership role. Then, as now, America was pushing for a fairer trading system. Then, as now, Washington was unhappy that its responsibilities for maintaining political alliances imposed too heavy an economic cost. The nation was unsure of how to respond to increasing globalization, including growing trade imbalances, job-competing imports, and the outsourcing of jobs to foreign countries by multinational corporations—all in their early stages in the 1970s but nevertheless already contentious. Then, as now—Vietnam then, Afghanistan today—a long war was ending without any semblance of American victory and was sapping the country’s appetite for military involvement overseas. In Nixon’s time, America’s allies were also worried Washington would turn inward, becoming nationalistic and protectionist.

FP: Yet despite those fears, and worries that the global system would collapse along with the dollar, the worst didn’t happen. Things stabilized, and the dollar maintained its dominant position in the world. Can the United States still keep its leadership position as it did then?

JG: My feeling is that we’re reaching another inflection point now that is as close as anything we’ve seen to August 1971, in large part because of the challenge from China. This is of a magnitude we’ve never ever faced, both in terms of economic power and military influence and the lure of Chinese authoritarianism. Our allies are saying, “We don’t want to take sides.” So I really admire what Biden is doing to reestablish alliances. But there can be no question that the depth of our economic problems is such that we’re going to be turning inward more and more. I think also there is a lot of pressure on the dollar as there was in ’71. Then, it came from the strong currencies of West Germany and Japan. Today, I think it’s going to come from the desire of Europe and China to really get out from underneath the burden of being whipsawed by U.S. sanctions.

FP: Talk about how the United States managed to recover following that Aug. 15, 1971, decision, keeping the dollar as powerful as it still is.

JG: A superficial reading of Nixon’s policy would have been that it was analogous to Trump’s America First approach. That was symbolized very much by John Connally, then U.S. treasury secretary, whose motto was, “Let’s screw the foreigners before they screw us.” He would have been at home with the Trump administration and vice versa. But here is the difference: The people around Nixon and Nixon himself did want to preserve the system as it existed. They believed in an open global economy and an America that could compete in it, rather than jettisoning the whole thing as Trump wanted to do.

And the United States was still able to lead in the global economy. The dollar stayed strong, even though it wasn’t connected to anything, in large part because of network effects: Everybody was comfortable using it, and there was really no real global alternative. Finally people believed in our institutions. They thought the Federal Reserve was a really effective, dependable institution. All these things gradually became the underpinning of the dollar in place of gold. What is really a threat to that dominance now for Biden is that we saw how perilously close we came to the destruction of these institutions under Trump.

FP: It seems as if Biden is in partial retreat from the world—Edward Alden wrote in Foreign Policy that Bidenomics is essentially America First with a brain. What can we learn in terms of the way Nixon adjusted then: preserving the system but also changing it?

JG: One of the similarities between the Nixon era and today is that there’s a real questioning of globalization. It’s quite interesting to go back to 1971: There was an enormous amount of protectionism in the air. For the first time, the United States was running a trade deficit. For the first time, the labor movement had turned protectionist. As soon as Japan and Germany started to recover, we were importing major manufactures, and that was impacting jobs. The same discussion took place in ’71 as took place today, which is that we have to bring this manufacturing home. So Biden faces some very similar pressures.

In the Nixon period, they were able to overcome these isolationist pressures and continue a very vigorous opening of the global economy, but that’s because it started out so closed. Today, the real difference is that it’s quite open. So just preserving the existing openness would be a major achievement. I think Biden is trying to do that. He’s not talking about new trade agreements but about closer ties with allies and trying to defuse existing problems, such as the Boeing-Airbus trade dispute and getting a handle on taxation globally. Yet unlike Nixon, Biden is staring in the face of authoritarianism and populism abroad.

FP: Why is that more serious than the Soviet threat Nixon faced?

JG: Because the Soviet Union really presented no economic threat to us. It was totally marginal to the global economy. You look at the ’70s and afterward, the name of the game became economic growth and prosperity. All these developing countries were becoming part of the global economy, and they wanted in, and we wanted them in because they were good markets for us. But the difference is that Biden is facing a much more static situation. He’s facing the complexity of having to create rules in new areas—for high-technology firms, for privacy, for cybersecurity. All these are brand new issues, and only by solving them can we keep the world economy from imploding.

FP: How do the very deep divisions in the United States now—with many Trump voters thinking the 2020 election was stolen—compare to then? In 1971, America was also at the tail end of a tumultuous period of protest over Vietnam, public anger over Nixon’s broken promises, and so forth.

JG: Here’s what the real big difference was: In Congress, there existed a substantial middle ground of Republican moderates. Nixon actually faced a Democratic-led House and Senate the whole time yet managed to get through a lot of legislation. The Democrats could easily have taken a negative stand just on principle, but they didn’t. There was more or less a consensus embraced in Congress that the United States had an objective interest in an open world economy, where it had a fair chance. It’s inconceivable that today there would be anything like that. The institutions aren’t functioning the same way.

FP: So you’re saying that overall, between both the domestic divisions and overseas challenges, Biden has it much tougher than Nixon did.

JG: Much, much tougher. There are several ways Biden has a much tougher job than Nixon did. One is that he has to preserve the current openness of the global economy against stronger forces that are pushing to fracture it. Second, Nixon was president at the end of an era when the United States had a lot of unilateral power, but the end hadn’t quite come yet. I interviewed former U.S. Secretary of State James Baker for the book, and he remarked how different that was even from the 1980s, when the United States could no longer dictate, for example, the Plaza Accord [a 1985 pact governing currency rates among the United States, France, West Germany, Britain, and Japan] as unilaterally as Nixon did. Third, the domestic divisions in the country are no longer just a dispute over what the situation is; it’s a disregard for the facts. It’s saying we don’t even agree on the premises. And finally it’s the rise of China, which unlike the Soviet Union is an economic challenge and is all-encompassing in its implications. So, yes, I think Biden is facing the most complex set of challenges of any president since Harry Truman.

FP: Let me push back on that a little bit. One, China is rising, yes, yet it is not posing an ideological challenge in that Beijing is really not exporting its peculiar brand of authoritarianism as an alternative model, as the Soviet Union did with communism for 40 years. And the second point is that, back in 1971, no one knew where it would lead. Globalization was an infant phenomenon. Now at least we know the world system we’re dealing with—isn’t that something of an advantage?

JG: Those are interesting points. No, China isn’t an ideological threat in the way the Soviet Union was, but its attraction is the efficiency of authoritarian government. The more we flounder in terms of dealing with our problems, the more China seems to be able to make decisions. Take the simple example of infrastructure. When countries look at our model, they must cringe, whereas the decision is made in China and taken care of. The second is that China poses a threat beyond economic competition in the way it is relating to developing countries through the Belt and Road Initiative, extending massive assistance without overt political and social conditions. So I think it’s not completely accurate to say its model is not attractive to a lot of countries.

On the second point, we know the parameters of the world economy now, but I would say what we don’t know is how the technological revolution is going to change it. We really don’t know what the implications of digital currencies will be. We don’t know what will happen to employment when it comes to artificial intelligence and machine learning. The entire global structure is going to look different. So I think it would be shortsighted to say here’s a fixed problem and that we know how to deal with it.